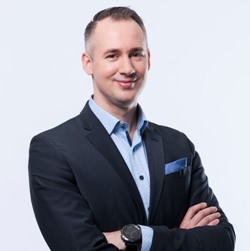 Born and raised in fintech/blockchain and general banking hotspot Switzerland and after spending six years in London Andy works for blockchain champion Bank Frick where he is in charge of the sales department. As a bank for financial intermediaries of all kinds Andy talks to fintechs, blockchain corporates, wealth managers, lawyers and many other intermediaries throughout Europe.

He loves trying out new things in the fintech world and is enthusiastic about crypto currencies. The only thing he regrets here is not trying things out earlier, say in 2010 or 2011. Having grown up as a dual citizen (Swiss/Scottish) Andy has been said to sound British but act Swiss. Academically, Andy holds MBAs from the University of Berne and the University of Rochester NY.